Play Dominoes for Money – Win with your Domino Skills!

Dominoes – Just like a game of Mahjong, Patience, or War, Dominoes have long been a great pastime for many families and social circles across the globe. With a set of rules that are easy to understand but still make the game challenging, it’s no surprise this popular game has survived for centuries and comes in different variations. In short, the most common types of Domino you can find online are the following:

But while a decade ago a game of Domino was mostly enjoyed at a social gathering, in today’s world Dominos are largely played online. And thanks to the advances in gaming technology, you can also play Dominoes for real money, against a casino or even other human opponents.

How to Play Dominoes?

The basic form of Domino found online is a single player block Domino where you compete against the casino in a set number of rounds. Per the rules, the game begins with both players being given 7 to 9 tiles for the round. Some variation also determine the first player by who has the highest pair (two 3s, 6s, etc).

Once the order is known, the first player places a tile on the table. The next player then makes a move and places a tile next to first tile, as long as the touching halves of both tiles match. The skill game continues this way until one player has placed the last tile, in which case s/he wins. If there are no tiles with matching halves to place, then the player loses the round.

In online gameplay, a full game of Dominoes will consist of a set number of rounds, with the final winner being the one with most rounds won. Some variations also determine the winner by the highest score. Generally, in scoring versions, the points are a sum of the losing player’s pips (dots). Most variations also add points for special situations, like when specific open tiles are matched.

Is there a Good Strategy?

This depends on the game. A classic game of block or draw Domino will take a different approach than a game of Pai Gow Domino. There are hundreds of different strategies for each specific variation, from counting techniques to defensive and offensive plays.

Once you know the type of game you want, you can easily learn where to narrow your focus. Whatever Domino game you decide to play, always make sure you know as much as you can about it and have some practice before you spend any money.

dom·i·no
ˈdäməˌnō
noun
plural noun: dominoes
1.
any of 28 small oblong pieces marked with 0–6 dots (pips) in each half.
2.
historical
a loose cloak, worn with a mask for the upper part of the face at masquerades.

Dominoes has it’s origin in China. The game dates back from some where between 12 and 13 century. The Italian sailors brought the game in the western world in the 1700s. After that it spread throughout the whole continent of Europe.

Domino is a game based on chance… and skill. Obviously you depend on the set of tiles you draw but a seasoned (rad skilled) player can still “read” his opponent and use that to his or her advantage. So you got the chance to add some skill to a game of Dominoes!

Domino isn’t as popular a game in casinos as Blackjack or Poker is, so don’t expect to be spoiled for choice when looking for what to play. Most variations are a take on the classic Domino games like the ones you’ve probably played at home, only here you’ll be playing for a real money prize. 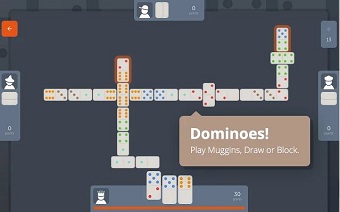 How to Play Pai Gow Domino?

In Pai Gow Tiles, or Pai Gow Domino as some call it, the scoring is similar to Pai Gow poker games. And just like with Pai Gow poker, here you will be given four tiles that you’ll have to split into two pairs to beat the dealer’s pairs.

Apart from basic pairs, there are also a few special pairs which are scored differently:

The basic rule is that you have to split your tiles into two pairs, high and low, and compare them against the dealer. If you win with both hands, you will get an even payout, if you lose by both, you lose. If you win by only one hand, the bet will be a push.

Other rules to note are tie rules, which state that any hand tie will be determined by whose hand has a higher ranking high tile. In this case, pair tiles (two 3s, two 6s,etc) are the highest ranking, while Gee June tiles rank lowest.

And the final thing you have to remember is that if a tie isn’t broken, i.e. it results in a 0-0, the win goes to the banker.

Conclusion about the game of Dominoes

Dominos is one of the easiest games to learn and play, both in its casual and real money form. The beauty of it is in the stimulating, yet simple, gameplay, which makes it easy to find people to practice with but also easy to master.

With Dominos, you don’t have to learn advanced theories and spend hours practicing strategies, and you don’t even have to bet your life savings on it. Both single player and multiplayer Domino games can be played for smaller wagers and in longer sittings, just like a game of poker. Thus, you can spend hours enjoying yourself without losing more than you bargained for.